Trill is loud and excitable! They rarely stop moving, and get antsy if there's nothing to do. Impulsive, with little self preservation, they're willing to do most things regardless of how dangerous it might be! So long as it's exciting and Fun, they're down, and honestly probably already doing it before you've finished asking them to.
They have a little difficulty seeing consequences to their actions, though they have gotten better at that considering...some things they've done have impacted them quite a bit.
Rowdy and fun loving.

Trill Hates. Hates showing anything other than that they're happy and having a good time. People like hanging out with someone who's having a good time, and is bright and cheery! So, a lot of negative feelings they bottle up and push aside, no need to deal with that, ever. Channel stress into action instead.
They're eager to be noticed, center of attention, and liked. Trill tells little lies a lot, wanting to be what people Want, so they change their opinions a lot to suit what people want to hear. Some things they're a stickler on, like their opinions on Monty, or some Moral Opinions, but otherwise they're a little fast and loose with the truth.

Honestly, Trill isn't that material of a person. They like things, but most of what they have they give to Monty. Instead, they like money. Mostly so that if someone else needs it, they know that they will be able to offer it up. Trill likes being able to be relied on.

Trill is the middle child of four, and it shows. They love their family, a lot, but they don't fit in much with their family. They were mostly travelers for most of Trill's time at home, but not long after Trill left, they would have settled down somewhere to open up a shop. Trill's parents thought it would be best for Aria to have a stable environment.

Cadence Caesura, Trill's mother. She's a seamstress, and really into the construction and design of clothes! She likes to make more traditional Whittier clothes, and really likes the complimentary nature of it, with the white, but pops of color inside! She's a very kind mother, warm, and loving. Married her husband completely out of love, and would say it's a love at first sight sort of story.
She has a very calm presence about her.

Hymn Caesura, Trill's father. He works making and applying dyes -- mostly to fabric, working well with Cadence in making cool clothes! But he's also interested in applying it to different things to help brighten up and personalize homes -- like glass, or pottery, things like that.  Gets caught up in his work easily, and is a little spacey and forgetful. The type of person to have lists of lists to make sure he remembers his to-do lists.

Cadence and Hymn are very loving parents, but much quieter compared to Trill, and tried their best to support Trill in what they did, but found it a little more difficult to grasp where their energy and interests came from. It was hard to encourage Trill to be adventurous and exploring, when they also have so little self preservation.

Coda Caesura, Trill's oldest sibling.  She's 50-60 years older than Trill. ​Very analytical, she likes knowing the full situation she's going into and then making choices based on that. Takes a lot of notes and test stuff a lot before finalizing their opinions. Not very reckless. Goal driven.
Coda is following in her father's footsteps and her interest in dyes, but is also very interested in magic, and finding some way to enchant the dyes to make garments and things do different things if they're dyed a different color. She wants to find a way to improve upon what their dad is doing.

Reed Caesura, the second oldest sibling, and also 50-60 years older than Trill. He's very booksmart and confident. Like Coda, he likes knowing a situation before engaging. Reed is very about Facts. If you can prove something to him, then it's fine, because there are things to back it up.
Similar to his older sister, Reed is very into magic. Though he's more into potions and those sorts of things. The type of person that would be very interested in the whole magic trade, bottles of pure magic, unfortunately. Very interested in going to the magic college in Pesca, but hasn't really left Whittier.

Both Coda and Reed are very close to one another! Very good friends with one another, and share everything with one another. Reed is only maybe a year younger than Coda, so they grew up really close. They also have a lot of the same interests.
It did, however, make it hard for Trill to engage with them.

Aria Caesura, Trill's younger sister. She's a couple years younger than Trill, and extremely withdrawn. Very anxious and introverted, doesn't talk a lot. She mostly stays close to Cadence, and helps her work. She really likes working with her hands, because it's something she can focus on and can create something to express herself without having to vocalize about it.
Very interested in learning about Whittier candy making, but doesn't mention this really.

Trill is much closer to Aria compared to Reed or Coda, and always worked very hard to make sure she felt comfortable and included in the family, despite being quiet and shy!! Trill knew that they had a difficult time fitting in with Coda and Reed, so they wanted to make sure that Aria didn't feel the same!!  Trill tries to encourage them to follow their interests, and would get them candy or books about candy making when possible. Aria was very appreciative!!
Trill, Trill's...clone? Copy? Trill lost their arm to the demon Wrath, and eventually that arm was used by a different Necromancer to make a clone. This Trill is basically the same up until that point in Trill's life.
Trill considers them as like a Twin, who just happens to have all the same experiences and memories up to a certain point. Totally normal.
Trill is very similar to Trill, but has had a different two years after the whole necromancy incident. They're a little more impulsive than Trill is now, since they haven't had many consequences to their actions. Still just as loud, excitable, and eager to please. Trill worries for Trill.
They're technically second on the Monty Rankings, right under Nero, and before Trill.

Melody Taft, one of Trills Best Friends as well as employees. Melody is a very timid, recently turned vampire. A small elf from Whittier, she's very unsure of herself, but really wants the best, and to believe in the best of people despite her situation!! Good hearted and kind, she doesn't really enjoy a lot of attention, but enjoys being with close friends.
Melody doesn't like hurting people, and doesn't really enjoy talking about the whole vampire thing. Through Trill, as well as meeting another Vampire, Velvet, she's come to accept that this is just kind of who she is now, and it's not necessarily a bad thing!! It doesn't make her a bad person, and as long as she can control herself, everything is fine.
Melody met Trill not long after she was turned, and not in a really great place. More or less in hiding and trying to figure out what to do with her new life, she really didn't want to interact with anyone else at all. Trill more or less stumbled across Melody while she was stuck in a shade spot waiting for the sun to go down, and Trill sat around nearby to make sure Melody was okay, and just talked to her casually, not even mentioning the vampire thing.
Trill stuck around for a while, and the two of them became close friends over time. Trill opens up the most to Melody about their feelings.
She agreed to work for(/with) Trill under Monty kind of as a favor to Trill, because she wanted to be able to help Trill similar to how Trill helped them!

Peony, another of Trill's Best Friends, as well as employees. Tall and spooky looking tiefling, originally from Poramaa. Similar to Melody, Peony is a little more withdrawn. She's quiet, and tends to keep to herself or close friends, but will go out of her way every time to help someone. Peony is a Cleric of Simothy, and normally would go with traveling merchants in order to make sure they arrived places safely. She focus' in clerical magic meant to protect and prevent harm, but is okay at healing!
She's a little more of an older-sister, trying to keep Trill out of harms way and more likely to tell someone when something is a bad idea, or that they'll get hurt doing that. More willing to physically remove Trill from climbing a tree so that they wont get hurt.
Trill met them while trying to barter with some merchants, and stuck around for a little while. They ended up chatting a lot with Peony, going out of their way to talk to her more often than not, since it seemed like Peony wasn't super integrated into the group, and they wanted to be friendly!! Trill got Peony to open up a lot more over time, and she's a little more outward now, became more interested in traveling and meeting good people.
They became good friends both with Trill and Melody, and agreed to work fore(/with) Trill because it seemed like it would be fun, and also to look after Trill who was. Accident prone. 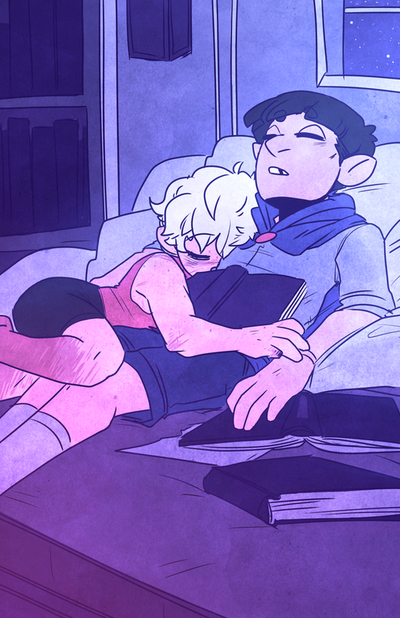 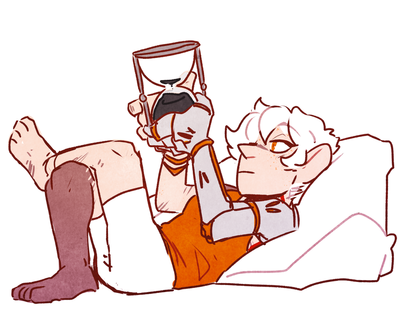 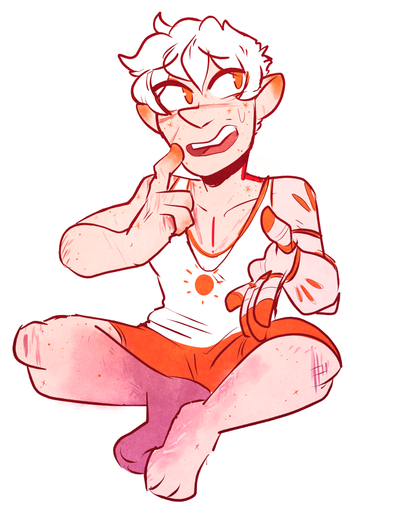 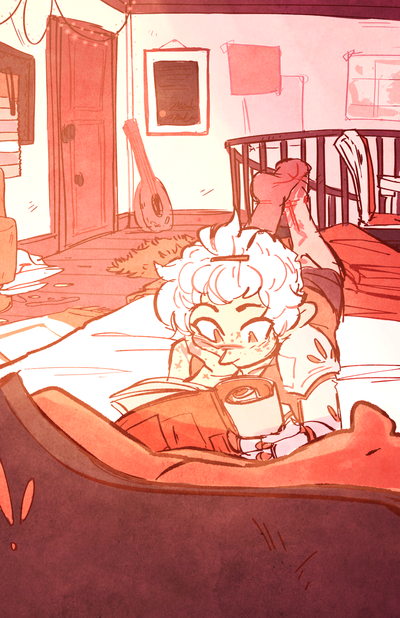 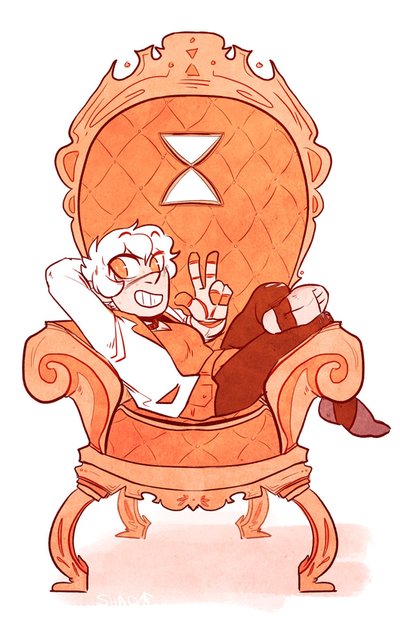 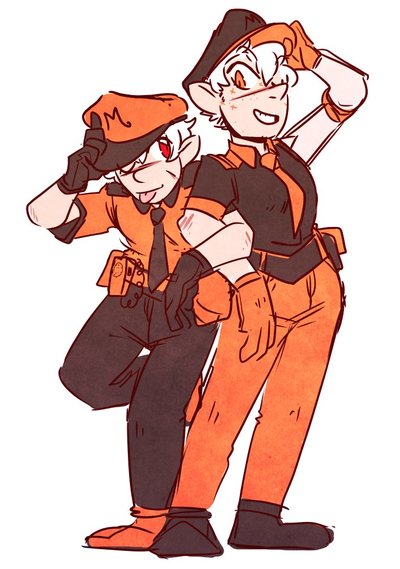 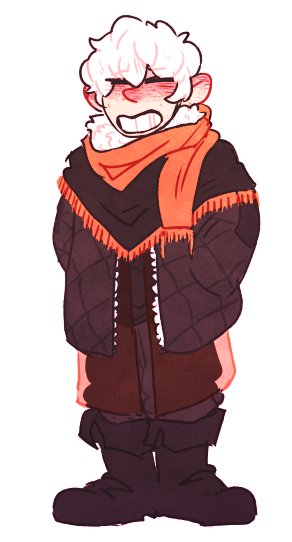 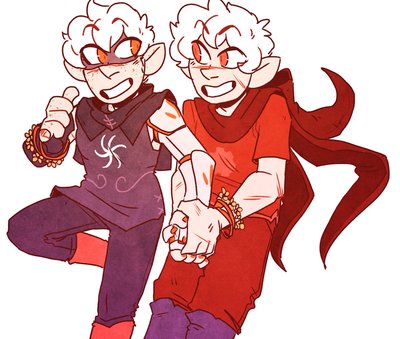 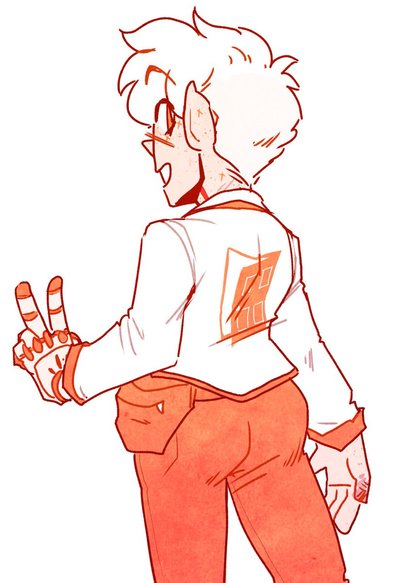 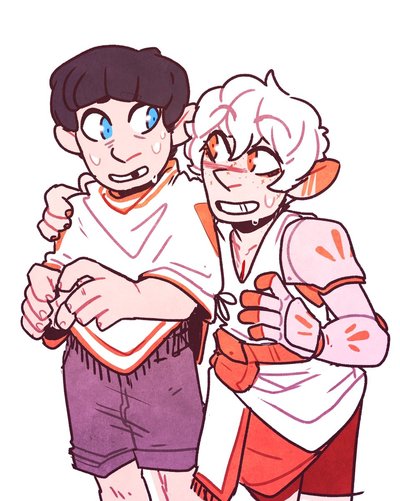 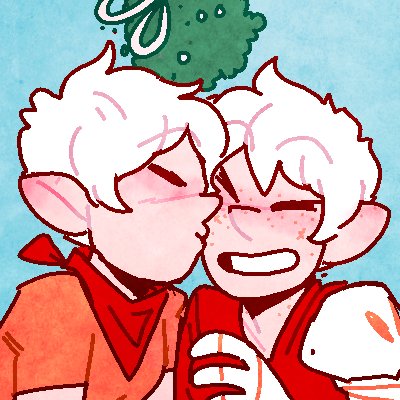 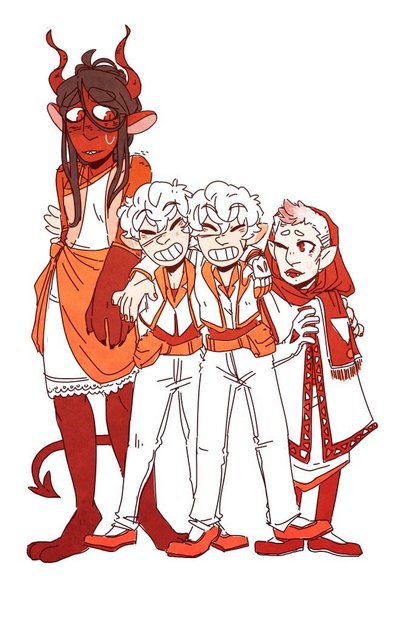 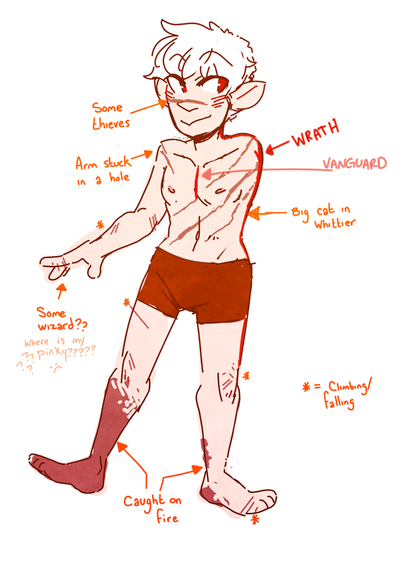 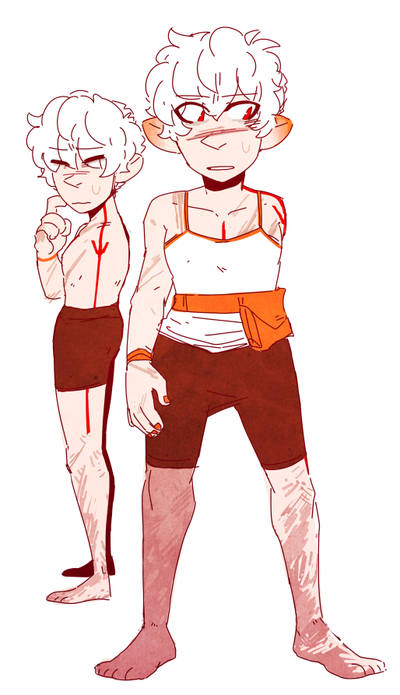 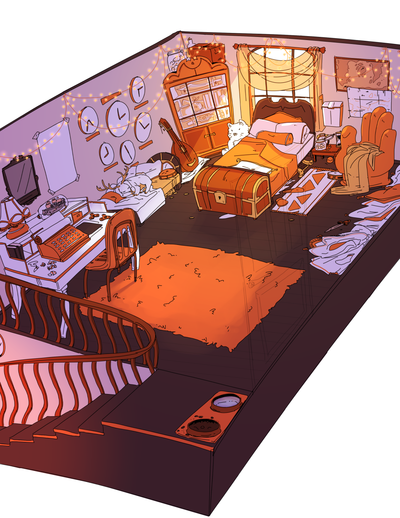 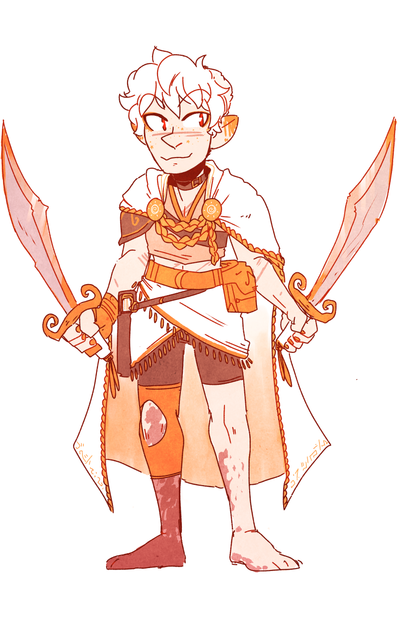 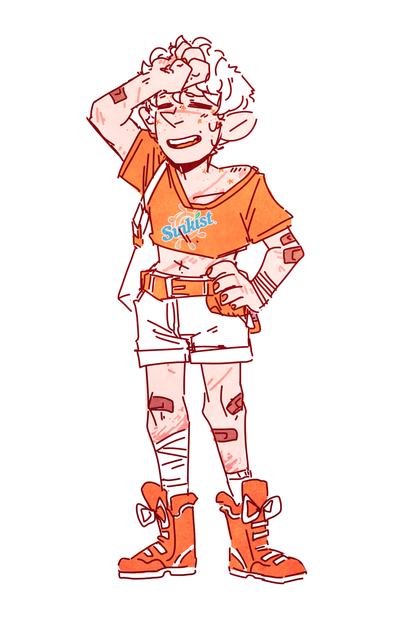 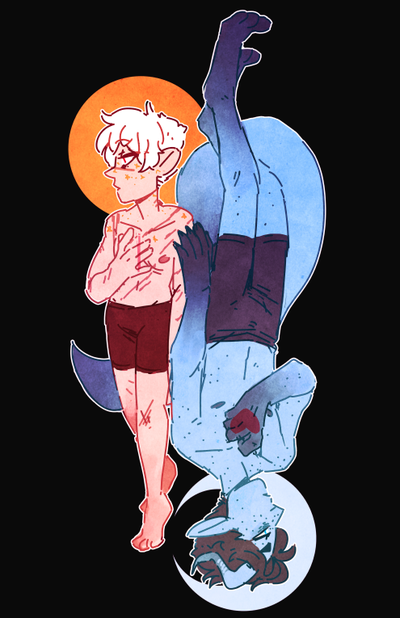 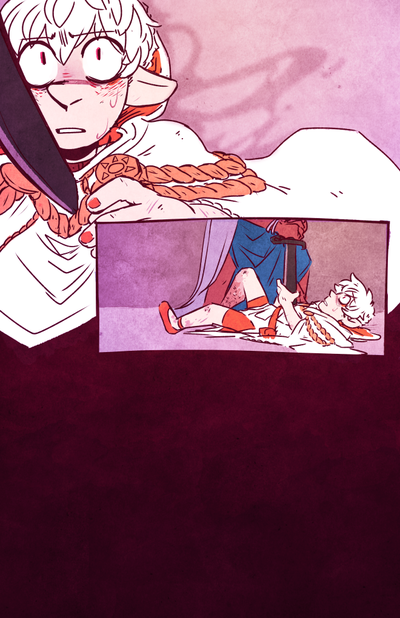 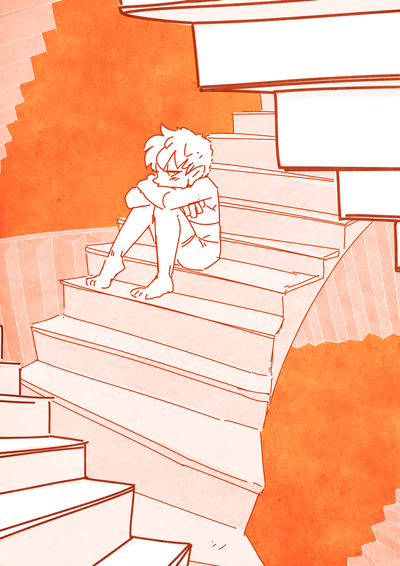 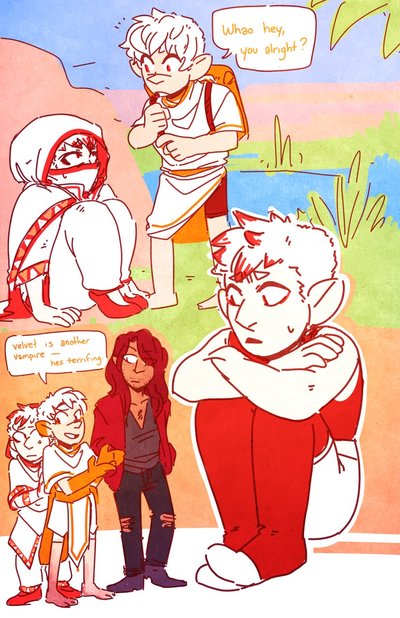 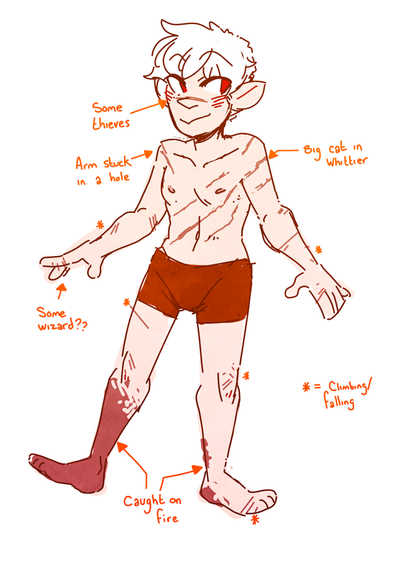 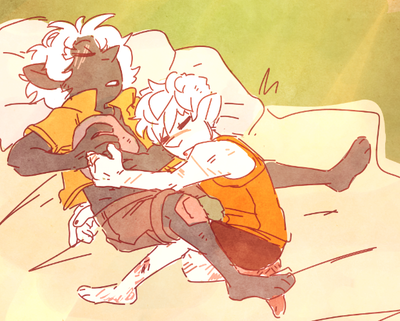 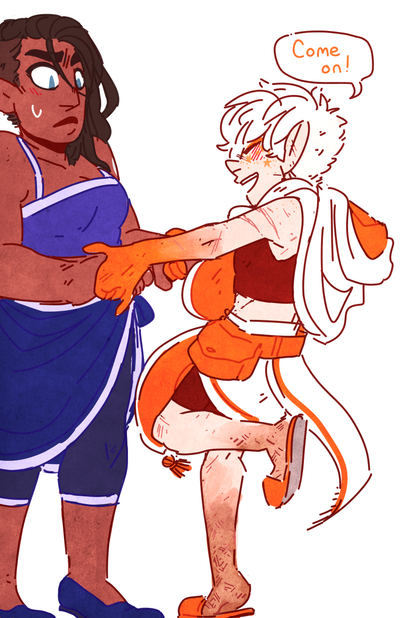 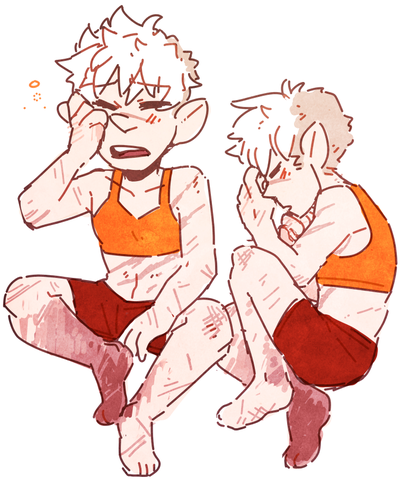 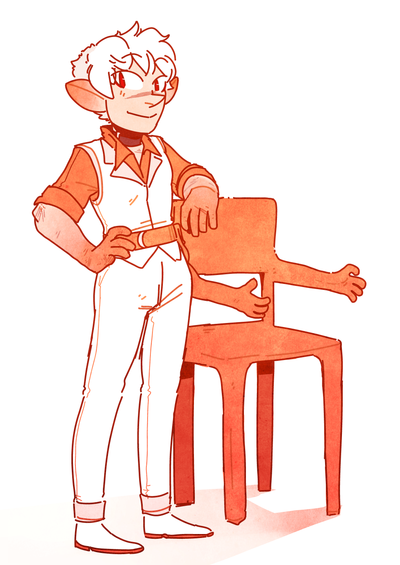 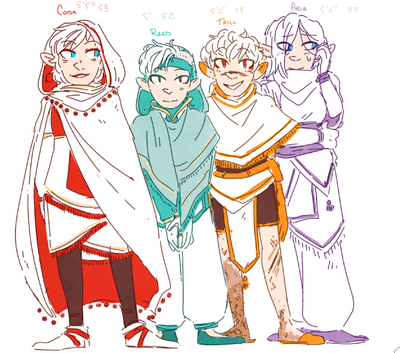 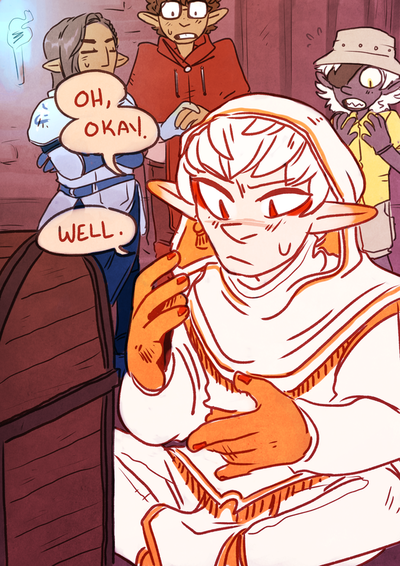 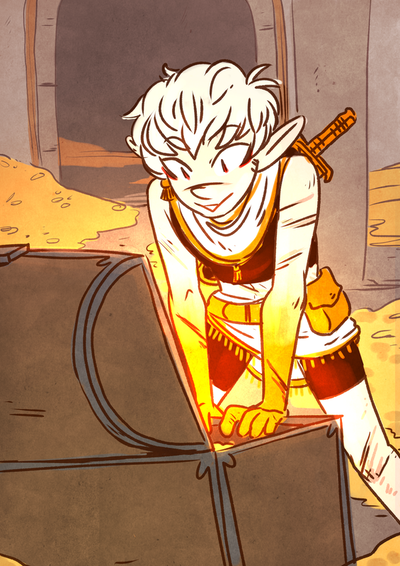