INFO
FAMILY
Bogdan has a...complicated relationship with family. He grew up an orphan, and as soon as he was able, he got out of there and got a job. He lived alone most of his life, didn't have much of a childhood, and never had a real friends, let alone any sort of familial relationship
He's desperate for that feeling, though, and that normally...does not end well, as he grows attached easily to anyone who's nice to him, or can fake caring about him a little. Eager to prove himself to someone for this.

Bogdan briefly met some of his blood family, but only recently.

Alisa Agohn, his mother, is a powerful person in Roshawk, basically directly under Lenya, and has a lot of influence in the country. She works with land and real-estate, and gives her input to keep the country running smoothly. She's a very hard worker, honestly, and cares a lot about her position in the world and her influence on it. Feels she works hard, and deserves a lot. When the apocolyse was starting, she made a deal with Pride for protection -- to not lose everything she and her family worked for. In return for this, she works with Pride, and also gave up her first born, which she wasn't planning on having in the first place.
The world didn't end, and she they thought they managed to pull one over on Pride, but accidentally had Bogdan 3 years later, and quickly gave him up.

She is known as Hearts in the whole Underground Magic Trade organization Pride has set up. Alisa is known to be able to physically remove people's hearts without them knowing/remembering, and for them to stay alive with their heart kept safely(?) in a jar. Hence "Hearts." Can use this to get her way, because it's pretty easy to control someone if you have their heart.
Has done a lot of research on the Magic Pools, and has all or most of the magic pools mapped out in Roshawk.

She seems to honestly regret having made the contract with Pride, but it's hard to tell if it's because it's screwed her over, or because she cares about the fact that it's effected Bogdan so much. Alisa had assumed he was dead until he met her 22 years later.
Wants to break her contract with Pride.

Kirill Agohn, Bogdan's birth father (presumably). He works with Alisa, doing accounting and paperwork, mostly. Not as ambitious or outgoing as Alisa, but just as hard a worker. The two of them married of convenience -- it made it easy to profit with their combined skills, and they could advance easier. While it was not a marriage of Love, they do like each other!!.

He seems to genuinely regret making a deal with Pride, and putting a lot of that weight on Bogdan -- at least more than mom. In the first timeline, after Zanderleigh broke Kirill's contract, he killed himself. Unknown if this was because of Pride, Alisa, or actually just because of his own grief. It could possibly be stress, that Pride would do something, or somehow it would wreck their family reputation.
Kirill was the one who hired Zacharias to take Bogdan as a child away from the family. It seems like Alisa is or was unaware that he did that. While this may have been to actually look out for Bogdan, and to keep Pride from getting a hold of him, it easily could have been just to get Bogdan out of their family, because a blue tiefling child would make it obvious that their family made a deal with Pride.
He seems nicer that Alisa, or at least more honest, but he could just be better at acting. Have not had enough time with him to gauge him well enough.

Bogdan desperately wants to be able to mend some sort of family relationship with them, but is also aware that they're not. Great people. Often willing to overlook that in hopes that maybe breaking their contracts will help, and they can reform into actually helping people.

A year after Bogdan, the Agohn family decided to have another child. This one on purpose and not being a tiefling.

Roksana Agohn, Bogdan's younger sister. She seems very similar to him -- Bad with people, very hard working, and not creative. Prideful in general, though that's likely how she was raised. She's focused a lot of her time into her school work, and is adept with fire magic. She double majored, and graduated early. Roksana currently works with Alisa in real estate, and doesn't appear to know about the whole Pride deal. She's unaware of Bogdan.
Assuming, she works very hard for familial and social approval, and is constantly being pushed that way by her parents. She's been trying to get and internship or apprenticeship with High Magician Lenya Herlofsky, which of course will never happen. Seems easily frustrated.
Bogdan wants to be on good terms with her, but is unsure how. He is, unfortunatly, very jealous of her magic abilities, and that she got to grow up with everything he feels like he deserved (Magic, Power, Social status )

Pride, a very powerful demon, one of the Seven Deadly sins. He is Bogdan's warlock patron, which Bogdan sold his soul to in order to access magic.  Formerly Fedya Constantine, an old Legendary Roshawk Hero who I guess succumbed to his sin after going in one of the Magic Pools.
Bogdan often looks to him as a sort of Parental figure, since Bogdan made a deal with him when he was 15/16. He's aware that Pride is Bad and a Liar -- in general a very bad person, actually, but also considers Pride as the only person who was "there for him" when he was younger. Difficult to detach himself from that feeling.

Joaquin Calloway, the Nightingale-- not actually related to Bogdan in any fashion, and especially so in this timeline. Once, before the group reset time, Joaquin helped Bogdan break his contract with Pride, and then helped train Bogdan who was no without any magic (or any other real fighting skills). Bogdan grew close to him, and looked to him as a father figure.
As it stands now, though, Bogdan sent Joaquin a letter when they first reset time, but never followed up on it. Bogdan feels very guilty about not following up and contacting him again. Partly, because Bogdan hoped that he could break his contract himself and that Joaquin would be proud of him for doing that -- and partly because he knows deep down that he's fucked up, and is crushingly worried that Joaquin is going to be disappointed in Bogdan, or angry with him. So he has just. Avoided seeking Joaquin out.
Bogdan misses him desperately, because training under him made him Very Happy.
ETC 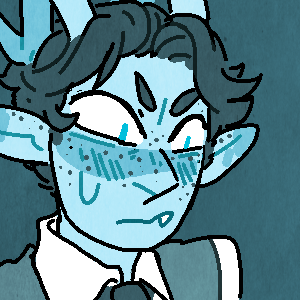 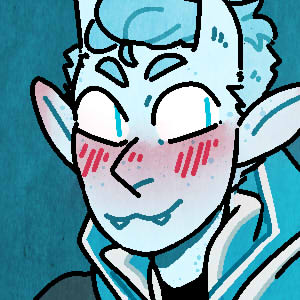 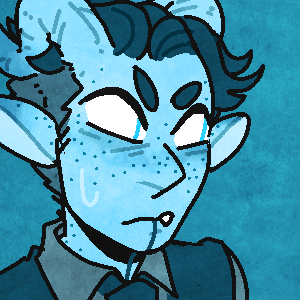